Is Artificial Insemination Right for Your Ranch

It goes without saying ABS promotes synchronization and AI, and the lifetime value it can add to the cowherd.There has never been a better time for synchronization and AI in the beef industry than today. Bull prices continue to set records and the additional value of AI bred and sired females can’t be denied.

But adoption of this technology use doesn’t come without questions and expectations from users, especially those new to or considering AI for the first time. Drovers CattleNetwork released an article online yesterday from their March issue, Dispelling the myths of artificial insemination, and one we feel is very accurate. Take a glance at it.

“AI isn’t meant to be easy and may not be meant for everyone, but it’s also not that difficult for people to establish in their operation,” Travis McCarty writes. “I believe more operations can incorporate AI into their management practices than what is currently being done in the industry.”

If you still need more information on whether AI is right for you and what other considerations are needed, check out these resources:

If you’re still skeptical about the value of AI compared to natural service with today’s prices, check out these cost comparison charts, using this spring’s data. These charts do not account for the genetic gain of using proven genetics or additional age and weight of calves born earlier in the calving season.

If you think synchronization and AI is something you want to incorporate, talk to your local ABS Representative today. Our professional, full-service representatives are here to help you with any questions and concerns you may have.

The Spring 2015 Beef Focal Point is online! Be watching your mail, hard copies should arrive soon.

Highlights in this issue:

Veteran ABS Sire, NEW DESIGN 878, recently celebrated his 17th birthday! 878 was born Feb. 17, 1998, and has been an impressive producer since he was a yearling. 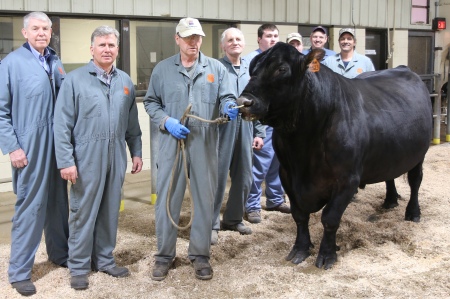 Pictured at 878’s birthday celebration on February 17, 2015: Brian McCulloh and Dan Borgen, and ABS barn crew who have cared for NEW DESIGN 878

At the turn of the year, 878’s production level approached 725,000 units, and he continues to rank in ABS’s top 20 bulls for beef semen sales in several regions across the globe. From 2003 through 2006, NEW DESIGN 878 topped the registration charts as the number one sire for registrations in the Angus breed, still holds the single-year registration record with 10,190 calves registered in 2004, and ranks second (behind first place, another ABS bull, EXT) for total lifetime registrations with 52,978 calves through September 2014.

“We knew from the day 878 arrived at ABS that he was going to be a popular animal,” said Doug Frank, ABS beef product manager. “He had a quick start and customers really liked his first calves, skyrocketing his popularity. He has since had a strong finish, continuing to offer the highest accuracy multi-trait proof in the industry.”

“At a healthy 17 years of age, 878 is proof that solid genes and great care are key to the performance and longevity of the animals,” said Brian McCulloh and Dan Borgen of Woodhill Farms, part owners of the bull. “As producers out in the field every day, we see firsthand that the way we care for our animals directly impacts how they grow and perform. ABS has this figured out and it only takes one look at their facilities and their animals for living proof of the great care their animals receive.

Despite his age, 878 continues to hit the list of American Angus Association’s Pathfinders®—holding the top slot for five years from 2008-2012 and remaining #12 today. 878’s maternal influence will likely be his most important legacy with 16,630 daughters on record weaning 55,543 calves and continuing to pass along his phenomenal genes.

Join us in wishing the “old man of the barn” happy birthday!