BISMARK is this week’s “Name that Beef Bull” Answer

This week’s “Name that Beef Bull” Quiz Game goes back to the “Exotic Era”.  This popular sire was the first Simmental bull imported from Switzerland in 1967.  During his peak, this sire saw such demand that it was necessary to advance order his semen.  Can you guess the name of this bull?   –   29SM0001 (18601) BISMARK SHB MM 2297 M’Bucheggberg 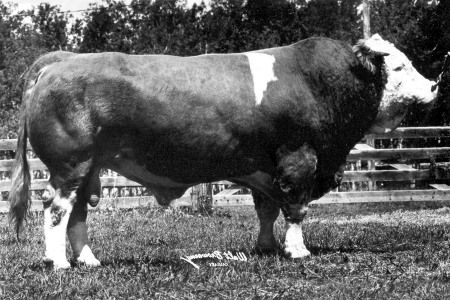 Heavyhearted in DeForest, Wisconsin, ABS Global is the world-leading provider of bovine genetics, reproduction services, technologies and uddercare products.  Marketing in more than 80 countries around the globe, ABS has been at the forefront of animal genetics and technology since its founding in 1941. ABS Global is a division of Genus plc.

This entry was posted on Friday, September 9th, 2011 at 4:17 PM and is filed under General Information, Simmental. You can follow any responses to this entry through the RSS 2.0 feed. You can leave a response, or trackback from your own site.